Friends sometimes give me a hard time because of the devotion to my alma mater, particularly the football team. But there are multiple reasons behind my madness.

A few weeks ago, I posted on Facebook that I was struggling with my writing. In order to get the brain and the keyboard rolling again, I turn to a subject that I love–Furman football. (Cue “eyeroll” from readers–but bear with me, please!).

On November 23, Allen Edwards strolled to midfield in Paladin Stadium and planted on the Diamond F, fellow Furman captains strolling beside him. They waited for the pregame coin toss, just as he had many times in years past as an All-American player and coach for the purple and white.

Only this stroll is different. This time, Allen “strolled” in a power chair, unable to fully use his right arm and leg. He was always stone silent in pregame, but this silence is different. Allen can no longer speak in full sentences, and forms only a few audible words. 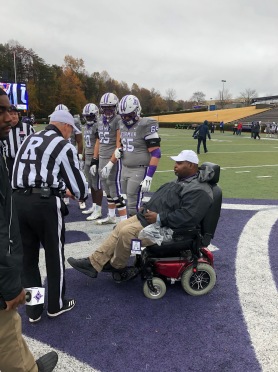 Allen Edwards remains one of the greatest players ever to set foot on a Furman football field. He won Southern Conference Defensive Player of the Year as a nose guard. Furman wisely brought him back as a defensive line coach for almost 10 years. Following that, he went on to coach at Savannah State with his former teammate/coach, Julius Dixon.

But all of that changed with a massive stroke that hit him in 2013. The quiet and serious, yet fun and jovial, former teammate and coach almost lost his life. He now resides in an assisted living facility, supported only by disability, Medicare, and the generosity of those who love him.

If there is a silver lining to this story, it is that Allen’s care is largely supported by former teammates, coaches, and colleagues, many of whom donate beyond their means to meet his needs. These efforts are buoyed by the work of the Furman Football Players’ Association (FFPA) that provides ongoing support in many ways.

People often ask, “Why do you love Furman so much?” I admit, my devotion may go a bit beyond the norm for some (but certainly not all) Furman alums. But there are many reasons behind my madness for all things purple and white. My love for Furman football is first on the list, and the response to Allen’s stroke is a primary reason.

I got hooked on this team and this sport on a cold November night in 1977, after a 31-28 loss to VMI at the old Sirrine Stadium downtown.  Walking out of the stadium, I yelled to one of the players, “Hey, you almost beat ‘em!” He stopped and laughed, reaching down like a giant to shake my first-grade hand before heading to the team bus.

And that was it. I was devoted forever.

The last 40+ years of the program are a success story beyond explanation. In spite of stellar academic standards and rigor, Furman football wins. One of the smallest FCS schools in the nation has 14 Southern Conference championships and the first national title ever for a private school. Allen started at nose guard as a freshman in that 1988 national title game, dominating the All-American center from Georgia Southern into six fumbled snaps.

But his play on the field is not the reason that those who played with him or under him offer their support. They offer it because Furman football creates an atmosphere of devotion and unity that is undeniable.

I had a small part of that in 1989-90, as a walk-on to the team. Much to my regret, I never played in a varsity game and had to leave the program after the 1990 season to take care of my own family. It leaves a hole in my heart that I never got to run down the hill and wear that cherished “F” on the side of my helmet.

What makes this a special program is the fact that no other player or coach ever looked down on me for that fact. Allen Edwards was my friend, although far superior to me as a player. We lifted weights together and ran together. He was the person who introduced me to the FFPA and invited me to join. In spite of the fact that he regularly ran me over in practice, he considered me a part of the team. And he invited me to continue to be a part of it.

That’s what makes Furman a special place. My experience was vastly different from the guys that started and played every down. And yet, they welcome me as one of their own, in spite of the fact that I was just a scout team “hero.”

It’s about Clay Hendrix, Furman’s current head coach, who worked with me and taught me and walked through struggles with me, in spite of the fact that I was just a walk-on. When I was tormented about whether or not to continue with football, he sat down and talked to me about staying with the team as if I was a full-time starter.

Not only that, he turned me into a pretty respectable offensive lineman.

It’s about George Quarles, the current offensive coordinator. Coach Q met my parents and me when I was 15 years old. He also took time to have lunch with my parents, less than a year before my father died, a memory that my mother still carries with gratitude in her heart.

It’s about the guys in the FFPA who used to give me autographs when I was a kid. It drove my parents crazy, but I insisted on getting every player to autograph my program after every home game. I now tailgate with those guys as they give me a little grief about my time as a 9-year old groupie.

It’s about Devin Wynn, who sat next to my mother at a scholarship luncheon last October. She was so impressed with him and his attitude towards her that she follows #22 religiously on Saturdays.

It’s about all the guys who give anywhere from $20 to $20,000 to make sure that their brother, Allen Edwards, has a place to stay and proper medical care.

Finally, it’s about days like November 23, a miserable and rainy one for a game that Furman dominated from start to finish. Some friends ask me why the Paladins even bothered to schedule that game.

The opponent was Point University, an NAIA school out of northwest Georgia. Their head coach is Julius Dixon, a captain on the 1988 national championship team, former assistant coach, and long-time friend of Allen.

“JD” worked with Furman to make the game happen, in order to give his team experience and the Paladins a much needed extra home game. But it went way beyond a football game. He wanted a chance to see Allen, to honor him and recognize the struggle he faces just to meet the day to day challenges of life. All the things we take for granted require great energy and struggle for Allen.

On Friday night before the game, a host of former teammates came by to see Allen at Windsor House, his current residence. He had a terrific time seeing these brothers, but his face lit up like I have never seen when JD walked in the door, carrying a box full of new gear and outfits with the Point University Skyhawks logo emblazoned on them.

Well beyond winning records and championships, this is what makes Furman football mean so much to me. That handshake in 1977 solidified a relationship with players and coaches and fans that has wrapped around me for most of my life. This is a group that sees and hears and responds to the needs of people who choose to be a part of it, well beyond the wins and losses.

November 23 was a great Saturday. Last Saturday? Well, not so much. As I screamed at the television—full of sound and fury, signifying nothing–my beloved Paladins took a beating in the opening round of the FCS playoffs. It was a demoralizing defeat that will leave a bitter taste.

That is, until September 5, 2020. And it is the reason that I will once again post my game day coffee pictures, ready to live or die just a little with every win or loss. I will be right back at a tailgate, waiting for kickoff of opening day. 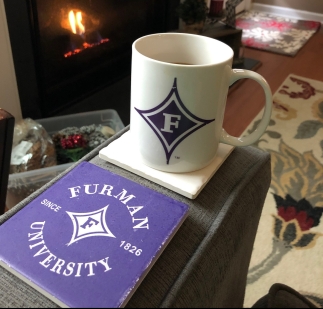 Allen will be with me, once again supported by those who love him. For him, as he struggles to deal with the most basic tasks of life, he understands that this is all much more than just a game.

And Furman’s understanding of that reality is what makes this program a special part of life.

2 thoughts on “The Reason(s) I Love Furman”